In 1776, the United States was founded through the ideas of the Declaration of Independence, in which it was affirmed that all human beings, created equal, had the right to life, liberty, and the pursuit of happiness. Once again, the murder of a Black citizen, a citizen born in the United States, George Floyd, showed us that the promises of the Declaration of Independence remain unfulfilled. Just like more than 200 years ago, only the white population has a monopoly on full citizenship. Despite more than a century of struggle by non-whites, non-men, and the non-wealthy, citizenship is still built on whiteness, masculinity, and class privilege. We must ask ourselves, in 2020, the same questions that freedom and civil rights fighters in the 1960s asked themselves: what are the benefits of constitutional rights and guarantees if the Black population continues to be unable to exercise them. 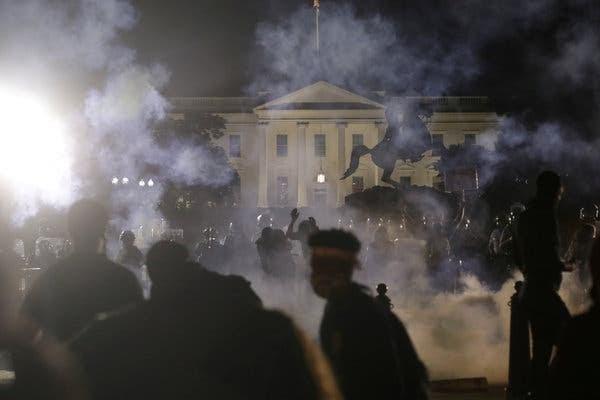 We are hearing certain criticisms of the systemic racism that operates in the United States. Whiteness, white supremacy and monopoly of citizenship go hand in hand and are indissoluble in the national and institutional construction of America. For this reason, we must repeat over and over that whiteness needs domination, exclusion, and the invention of the Other to maintain its fiction of white America. In the 1970s, during the battle for the integration of Black people in the education system in Boston, in front of the Black citizens who, in the words of Ruth Batson, affirmed that “Our goal is first-class citizenship”, were those who shouted Restore Our Alienated Rights. For them, segregation was the only way to maintain full white citizenship. The enforcement of the 14th Amendment was, for whiteness, an offense and an impediment to its own free development.

Fifty years later, the Black population has not yet reached that first-class citizenship that the 14th Amendment claimed to guarantee. To this day, an unarmed Black citizen remains a threat in the collective imagination, as evidenced by the killings at the hands of the police of George Floyd, Ahmaud Arbery, or Breonna Taylor. However, in New York, a white man can threaten a police officer with an ax without fear of being shot. In 2020, a group of white supremacists, under cover of the Second Amendment, can storm the Michigan parliament armed with guns without fear of being shot or detained, despite violating the confinement decreed as a mechanism to fight a pandemic. This same situation involving Black citizens would be unthinkable. We need only remember the persecution and the political trials to which the Black Panther Party was subjected due to its self-defense, community protection, and search for racial and social justice. All actions also guaranteed by the Second Amendment. While the former was called protesters for freedom, the latter remain in the collective imagination as terrorists.

We do not need to go back in time to find this comparative grievance. During these past few weeks, we have been watching the police launch tear gas, rubber balls, and hit peaceful protesters. We have seen how the armed violence of white supremacists is uncontested in the face of the punishment to which Black protesters were subjected. We have seen how protesters’ violation of the curfew is stigmatized, while the violation of the sanitary confinement of those who assaulted a democratic institution in Michigan was praised. Faced with the impunity of the white privilege for physical and institutional violence against non-white bodies, the response of the protesters has been violence against repressive institutions and on the mechanisms of exploitation of the working population. 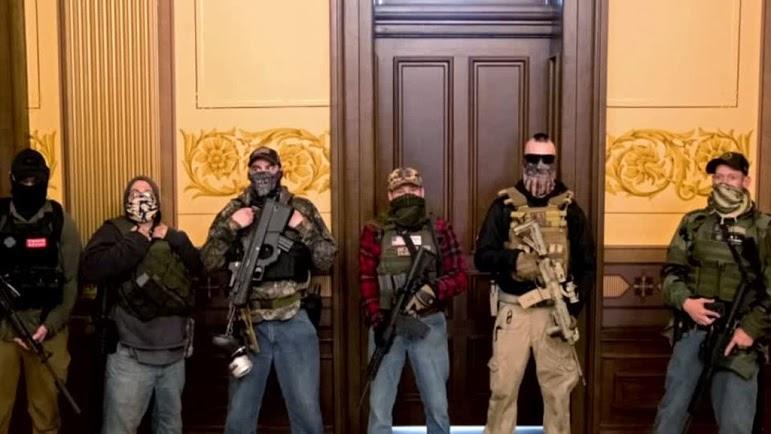 Looting is not a criminal hybris, it is a political strategy. We cannot forget how America expanded and enriched thanks to the genocide of the Native peoples and slavery. We can neither forget how the development of key infrastructures is due to the semi-slave Asiatic workforce and an eminently Black imprisoned population. Incarceration was the continuation of servitude after the legal abolition of slavery. Looting is a political rebellion that faces the mechanism that dispossesses and excludes non-white populations. On the other hand, white outrage at looting shows that they only care about a movement when it destroys private property. The life of a murdered Black citizen matters less to them than a pair of Nike sneakers. Furthermore, the following question may be asked: What would have become of the Republic of the United States without the Boston Tea Party, without the War of Independence that destroyed private property? Wasn’t the destruction of English property the revolutionary spark that gave birth to America? White privilege only conceives property as a monopoly of its own, the establishment and the United States in claiming non-white lives abroad.

Taking all this into account, Black Lives Matter is not only trying to protect the lives of all Black citizens but also embodies an opportunity to dispute the idea of a racist and exclusive America to whiteness and capitalism. That means the beginning of a radical democratic country. In disputing America to whiteness, Black Lives Matter can snatch away the common sense from the conservatives and abolish their vindications about family, whiteness, and masculinity,  the idea of the “Cultural War”, and their fight for “the Soul of America”. Black Lives Matter is the spark in the haystack that can accomplish the dream of the civil rights fighters and Martin Luther King.

For more than three weeks now, the Black population and those who support it have been clear about the strategy to follow. If the political establishment does not care about their lives, except when their death is publicly exposed as a spectacle of the macabre, fighting is the only answer. Martin Luther King not only advocated a peaceful path to equality, but he was also aware, and he stated this many times, that the privileged would never leave their position peacefully. His murder proved his words. This is why it is especially cruel for those who stand for the All Lives Matter and the conservative establishment to invoke the MLK name. Since the same people who recall his name today are the ones who despise his legacy: Black Lives Matter. They allow themselves this luxury, thanks to their white privilege, to say to Black people what thoughts their leaders had and how they should behave from their white interpretation of Black leaders.

Curiously, Trump decides to put restrictions on liberties when an intersectional movement like Black Lives Matter and anti-fascists decide to protest and not when the coronavirus is killing the population of his country. Only white and class privilege matters. In an authoritarian drift of his fascist discourse, he decides that he even plans to deploy the army, declare war on his own population. And, deepening further in the repression of American freedom and revolutionary movements, such as Antifa, he tells them that he is going to declare them terrorists. The Industrial Workers of the World have a bloody history of anti-fascist struggle, first against the Ku Klux Klan, then against fascism in Spain and then against Nazism and all the white supremacists who have appeared in the United States to this day.

The protests must continue, a deeply intersectional movement must be organized that realizes the rights to life, liberty, and pursuit of happiness for all people, regardless of creed, gender, or race. This is truly Antifa. This movement must be based on all the theoretical and fighting experiences that can be gathered from the SDS and the Black Panther Party to the present day.

The slogan “defund police” must be a reality and must be accompanied by “and refund communities”. The problem of militarization and the high budgets that the police have in the United States is racist as well. Instead of eliminating the root problem, eliminating racism and poverty, the aim is to suppress it with more militarized police. The money in police budgets must be returned to the communities so that they can improve schools, neighborhoods and eliminate the poverty created by capitalism. One of the leaders of the Black Panther Party, Fred Hampton, has already said, racism is not fought with racism, but with solidarity, and white capitalism is not fought with black capitalism, it is fought with socialism. The simplest teaching of what is happening is that it is necessary to eliminate the present system and forge a new one based on social, racial justice and that everyone has the right to life, liberty, and pursuit of happiness,. And this is accomplished by overcoming capitalism and modernity with its artificial divisions of gender and race.

There is no equidistance possible, fascism is a genocidal and exclusive political theory, anti-fascism only fights against fascism, picking up within itself any political theory. After all, what Trump is proposing is to outlaw all leftist and revolutionary movements in the United States, since all of them, being deeply democratic, are deeply anti-fascist.

We, the authors of this text, are Spanish and, as well as the rest of Europe, by the end of the 1930s we came through a harsh war against fascism. Despite the final victory of it and the subsequent Francoist dictatorship, antifascism was the main ideology and mechanism that fought and tried to stop the extermination and political prosecution policies of fascism. Besides, the Republican and Socialist sides of the Spanish Civil War had the honor of fighting alongside the American volunteers of the Lincoln Brigade.  More importantly, this brigade was the first mixed military corps under the command of Black officers. One of those heroes was Oliver Law, who gave his life near Madrid fighting for democracy in a foreign country.

Europe and Spain cannot forget the role of the African American soldiers during the fight against fascism. Europe and Spain must not be satisfied just with supporting Black Lives Matter while they let migrants and refugees die in the Mediterranean and their southern borders with Morocco; we need to denounce the abhorrent concertinas, the CIEs, and the outrageous episode in the Tarajal in the Spanish border in northern Africa. Europe and Spain must not support Black Lives Matter just to calm their bad conscience from the racist violence they permit on their territories, or from the labor exploitation the migrant workers stand in the greenhouse fields in the south of Spain, and the social exclusion they impose over the non-white migrants by denying them regulation and citizenship. If they do not, Europe and Spain won’t be better than those that chant All Lives Matter.

Marta Caro-Olivares is a PhD candidate at the Universidad Autónoma de Madrid and specializes in US History, Neoconservatism and Critical Theory.