“The strike was called November 9th, 1903. … The whole state of Colorado was in revolt.” – Mother Jones

It’s well known how, in 1905, the famous “Big” Bill Haywood helped found the Industrial Workers of the World in Chicago with Mother Jones, Lucy Parsons, Eugene V. Debs and others. Fewer know that Colorado – specifically the Colorado Labor Wars – was where Haywood and several other wobbly founders forged bonds of solidarity among miners and learned the pitfalls of business unionism. Or, that it’s where Haywood ran for governor, albeit from inside an Idaho jail cell.

And very few know that Colorado’s most successful strike took place under IWW leadership, during an overlooked surge in the union’s influence between 1927 and 1928.

Western Federation of Miners and the founding of the IWW

Approaching the turn of the 20th century, in the American West’s mining industry, big Capitalists were putting the squeeze on Labor and conditions were increasingly mean. Workers from Idaho, Montana and Colorado began organizing and, in 1893, would form the Western Federation of Miners.

WFM’s initial strikes took place in Colorado, with Cripple Creek’s first miner’s strike of 1894, and after that, in Leadville in 1896-1897. Haywood joined the WFM in 1896 as did another of IWW’s earliest members, Adolphus S. Embree, in 1899.

In Idaho, 1899, mine workers, armed and masked, hijacked a train and blew up mining equipment belonging to operators that refused to sign a WFM contract. The equipment was targeted because it was at the cutting edge in mining technology of the time and thus extremely expensive.

The event terrified bosses on both sides of the national border. At the time, Haywood was also in Idaho, while Embree was farther north in British Columbia, Canada, both mining precious metals. Idaho Governor Frank Steunenberg declared martial law, convincing President McKinley to deploy soldiers and detaining over a thousand men in a barn without trial.

By 1903, tensions would erupt into what is now remembered as the Colorado Labor War, where employers brought against workers the most systematic use of violence in U.S. labor history. In the face of brutal suppression, miners executed multiple coordinated direct actions in at least six mining towns throughout the state in 1903 and 1904.

Galvanized in these and other struggles in the region, radical factions within the WFM sent delegates to Chicago in June of 1905 to help found a new organization to compete with the American Federation of Labor in uniting workers from different industries.

The IWW was founded as AFL’s radical alternative – staunchly international and anti-capitalist – fiercely critical of the AFL’s privileging skilled labor and its tolerance of nativist sentiments.

Back in Idaho, Steunenberg was assassinated in a bombing outside his Caldwell residence in late December, 1905. 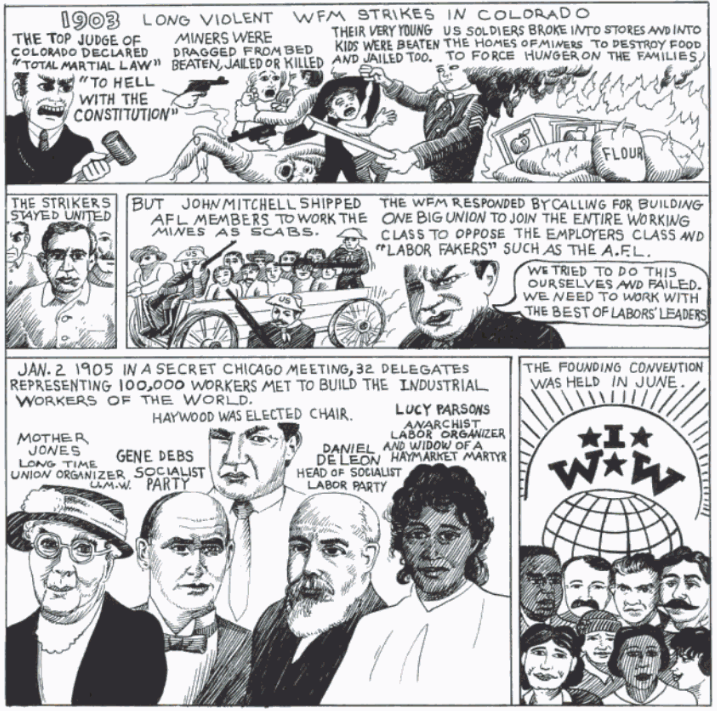 Colorado and the IWW’s early years

The IWW’s second convention, in 1906, began in open conflict and concluded in schism.

As with many revolutionary organizations, the IWW was internally divided from the outset. Many members drawn from the AFL brought the federation’s reformist tendencies, while WFM dual-carders (workers affiliated with two unions) included members with more conservative beliefs.

“The struggle for control of the organization formed the Second convention into two camps. The majority vote of the convention was in the revolutionary camp. … On the adjournment of the convention the old officials seized the general headquarters, and with the aid of detectives and police held the same, compelling the revolutionists to open up new offices,” – Vincent St. John

A few months after the convention, “Big” Bill Haywood was arrested in Denver at WMF headquarters and transported to Idaho, where he was accused of orchestrating the assassination of former governor Steunenberg. From his Boise jail cell, he won over 16,000 votes for governor of Colorado on the Socialist Party of Colorado ticket while designing WFM posters and reading Upton Sinclair’s “The Jungle”. By the end of 1907, the WFM would cut ties with IWW, Haywood would leave the WFM in 1908. Dual-carding wobblies were likely involved in continuing labor disputes in Colorado, including the infamous Ludlow Massacre of 1914. The IWW had held free speech rallies in Denver in 1912 and 1913, and A.S. Embree was seen during the long strike (1910-1914) which preceded the massacre and other events of the Colorado Coal War.

In 1916, IWW leadership determined to wage a major campaign, authorizing “an appropriation of $2,000.00 be made for organizing the miners of California, Nevada, Arizona, Colorado, Montana, Utah, Idaho,” (Proceedings of the Tenth Convention of the Industrial Workers of the World. Chicago, 1916, page 61). Embree and another wobbly, Frank Little, were two of the external organizers sent to the field. They arrived to find the IWW forgotten to most miners and a united front among bosses and government agencies.

The Mountain West and the Fall of the IWW

“Guns, revolvers, machine guns came to Bisbee as they did to the front in France. ‘Shoot them back into the mines,’ said the bosses,”.

“Then on July 12th, 1,086 strikers and their sympathizers were herded at the point of guns into cattle cars in which cattle had recently been and which had not yet been cleaned out; they were herded into these box cars, especially made ready, and taken into the desert. Here they were left … without food or water to die,”- Mother Jones

The United States entered World War I in the spring of 1917. Early that summer, workers with IWW Local 800, fighting for better conditions in Arizona’s copper mines, were ready for action. A.S. Embree had been organizing miners operating out of Bisbee, with another IWW leader coordinating from Phoenix. Just before the strike, the Phoenix offices were moved to Salt Lake City, and Embree was cut off.

Though over 2,000 workers joined the Bisbee strike, a posse of even more assembled on behalf of the bosses and selected 1,200 deportees to load onto a train, later to be dumped in the desert over a hundred miles away. They were held in Columbus, New Mexico for over two months by federal troops who had been on the hunt for Mexican revolutionary Pancho Villa.

It was the largest deportation in U.S. labor history.

After release, A.S. Embree would travel north to copper mine strikes in Butte, Montana where IWW organizer Frank Little was lynched, on August 1, 1917. Little was the second of three early IWW martyrs along with Joe Hill, an IWW songwriter, organizer, and activist executed by firing squad in Utah, in 1915, and Wesley Everest, a former Serviceman and Lumberjack who was lynched by a mob while defending his union hall following the 1919 Seattle General Strike.

Embree had earned a reputation in subsequent strikes in and around Montana as IWW’s “ablest tactician” while also returning to Tucson, Arizona to face down incitement of riot charges over events at Bisbee. He was targeted by federal agents from 1917-1920 who provided evidence to prosecutors in Idaho, where he was sent to state prison from 1921 to 1924 on charges of, so-called, “criminal syndicalism.”

Disrupting the copper industry during war-time production led in part to the federal government’s overwhelming and devastating attacks on the IWW. These began on September 5, 1917, when state and local forces initiated raids against IWW offices, as well as private residences of the union’s leaders, all across the U.S.

In the end over 150 wobblies were arrested and charged under the then new Espionage Act. IWW co-founder Eugene V. Debs would be arrested in June of 1918 and sent to prison in April 1919 for speaking publicly against the war, “Big Bill” Haywood fled to Russia in 1921, where he would die seven years later at the age of 59.

Taft, Philip and Ross, Philip. “American Labor Violence: Its Causes, Character, and Outcome,” The History of Violence in America: A Report to the National Commission on the Causes and Prevention of Violence, ed. Hugh Davis Graham and Ted Robert Gurr, 1969.