This is Part II of an Industrial Worker series on Colorado IWW history.

Entering the mid 1920s, the IWW was preoccupied both with the legal defense of its many imprisoned members as well as internal debate over whether said defense was part of the mission proper of the organization. Meanwhile, coal industry wages began to stagnate and fall.

After working and organizing for over 25 years in the mining industries of the American mountain west, and subsequent targeting by state and federal agencies, IWW organizer A.S. Embree was sent to an Idaho prison in 1921 for “criminal syndicalism.” He emerged in 1924 into probation, blacklisted and destitute.

The IWW was divided – in the leadership between communists, accused of conspiratorially steering the organization according to the party program of the Third International, and anarchists who favored decentralization; and in the membership on the same issue, loyalties further divided on the question of Big Bill defecting to Bolshevik-led Russia while his counterparts went to Leavenworth.

Embree moved his family to Chicago to be closer to IWW headquarters. He was sent to the Colorado coal fields in March 1926, where Wobblies had been laying the groundwork. A 1932 historical account puts IWW organizers in the area as early as December, 1925. Another from 1963 claims IWW field organizer Frank Jurich formed Industrial Union 210-220 in September. But the July, 1924 edition of Industrial Pioneer contains the following brief report on page 43:

“The Metal and Coal Miners’ Industrial Unions Nos. 210-220 held a convention at Butte, Mont. Steps were taken to expand the organizations. The Metal miners are supporting the miners’ strike at Santa Eulalia, Mexico. John Martin is now Secretary-Treasurer of 210-220.”

United Mine Workers of America were also organizing miners in Colorado, who numbered between 12 and 14 thousand and were increasingly agitated by working conditions and stagnant and falling wages. Dual-carding (joining both unions) or organizing exclusively with the IWW became more prevalent. “Their betrayal by international officials of the UMWA in 1921-1922 has disgusted them with that organization and they are now willing to listen to what the I.W.W. has to offer,” said Embree in one of his first reports.

After three months of organizing and reports back to headquarters, Embree requested to reunite with his family in Chicago. He did, but before long he was sent back to Colorado, seen as too big a threat by holders and seekers of union officer positions. By March of 1927, Embree would report IWW membership numbers from the Colorado coal fields increased by a factor of five. Along with IWW leader and organizer Kristin Svanum, Embree would head up the most successful workers’ strike in the history of the state of Colorado. 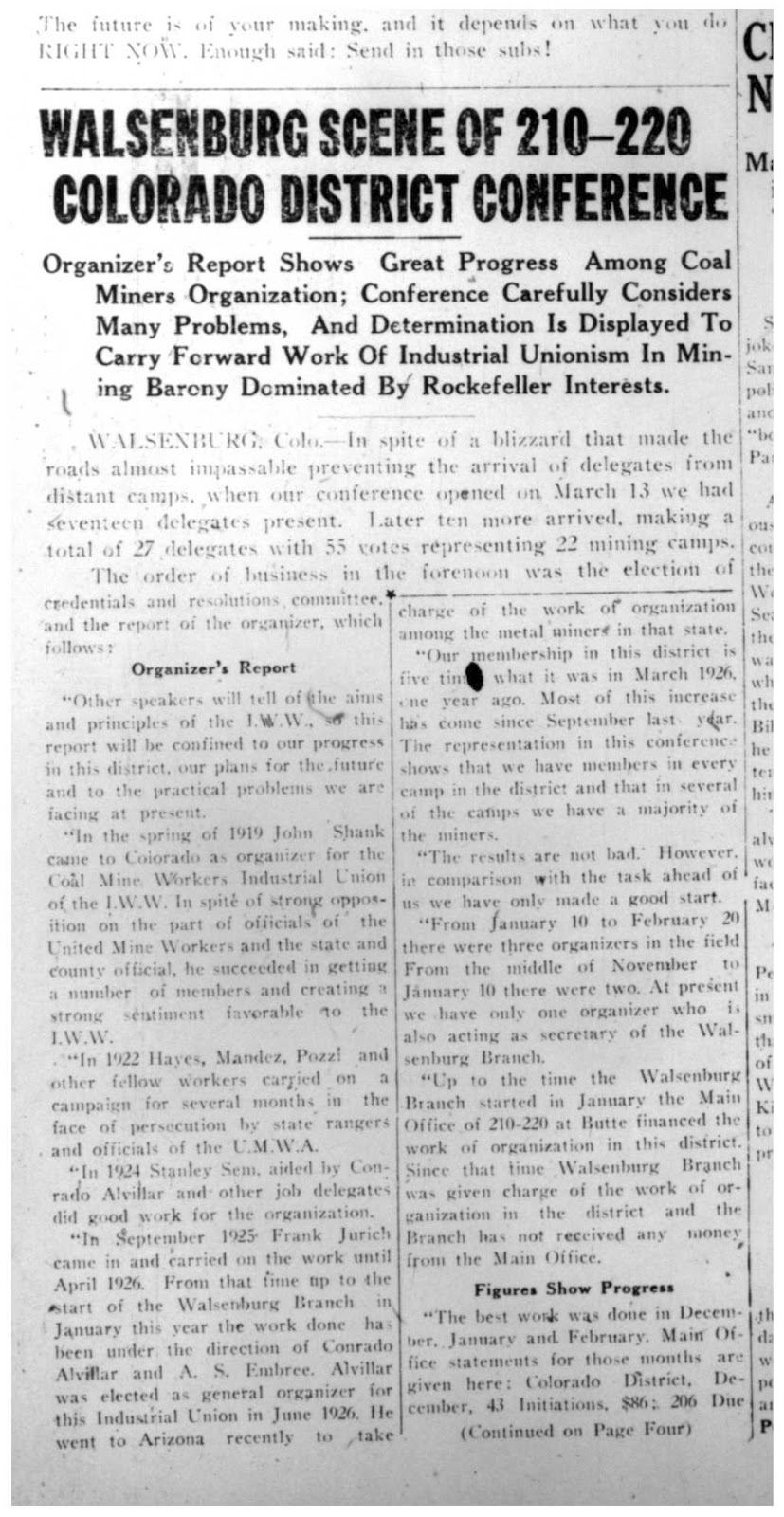 A.S. Embree and Kristin Svanum did the slow, quiet work of organizing throughout the year of 1926 in southern Colorado, basing operations out of Walsenburg, 30 miles north of Trinidad and 20 miles north of the site of the Ludlow Mine Massacre of 1914. By December they opted to go public, inviting the famous labor activist Elizabeth Gurley Flynn to speak in Pueblo, Aguilar, and Walsenberg.

In March 1927, IWW Industrial Union 210-220 held a publicized meeting where they passed resolutions in support of political prisoners, just as the president of UMWA local District 15 issued a public statement denying any intention of strike actions in the Colorado region. UMWA’s most important bargaining unit did in fact strike at the end of March, eventually to be defeated and dissolved. Colorado miners feeling betrayed by UMWA leadership continued to turn increasingly to IWW IU 210-220.

More mass meetings were held as spring turned into summer, rallying around firings and blacklisting of union workers. Embree sent some blacklisted workers with money to New Mexico and northern Colorado to work as IWW organizers. IU 210-220’s ranks swelled to close to 1,000 members. In early July they held the Walsenburg District Conference, attended by representatives from 36 mining camps. 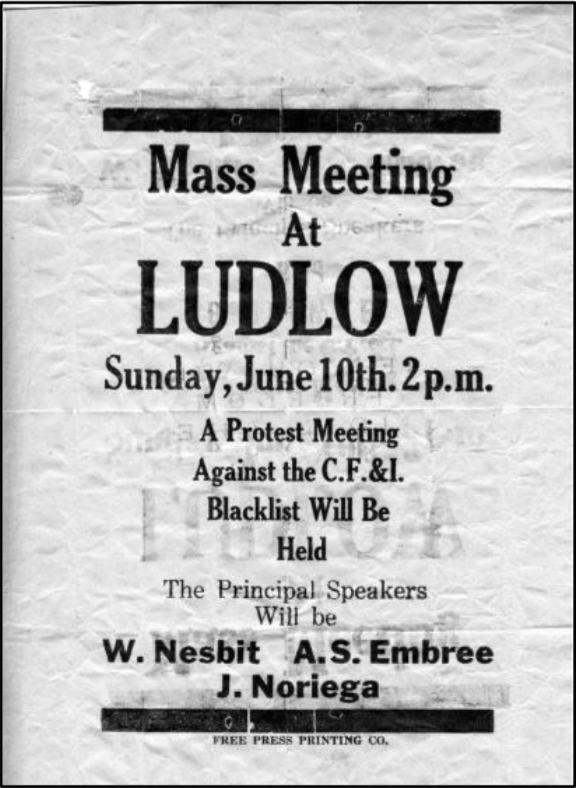 On July 24, 1927 IU 210-220 called for “a convention of all western coal miners, regardless of union affiliation, said convention being given power to call a strike of all western coal miners,” according to an article from July 27 in Industrial Solidarity. On August 6, 1927 when the international executive board for the IWW called for a three day work stoppage to protest the approaching execution of the political prisoners Vanzetti and Sacco, the workers of IU 210-220, centered in the Walsenburg district, were the only ones to take action. They staged walkouts for two days. The walkouts started on August 8 and according to the sheriff of Huerfano County over a thousand miners participated.

Embree, Svanum and other organizers were visited the next day by the State Industrial Commission (formed in response to public outcry after the Ludlow Mine Massacre in 1914), who told them that the walkout was illegal because the union had not given 30 days’ notice. At emergency meetings, Embree asked workers to vote, encouraging them to postpone further strike actions. The workers voted almost unanimously to end the strike. Svanum chaired as the group met again in Pueblo in September, issuing new, revised demands focused around wages, hours, working conditions and procedures and setting a strike date for October.

The Colorado Coal Strike of 1927 begins

“Our plans at the present is to answer by giving blow for blow, by strikes. When any member is discharged for union activity, we shall answer by a STRIKE IN ALL THE MINES OF THE COMPANY INVOLVED.”

The strike notice sent by IWW IU 210-220 was rejected by the State Industrial Commission on grounds that IWW did not represent the miners, an attack regularly used against workers organizing under the union throughout its history. The General Strike Committee pushed the date back ten days in response, to October 18, 1927, feigning a stall for time to hold strike votes. They were spreading north into more mining operations, as well as agriculture.

From Oct. 10-15 Wobblies were beaten, robbed, arrested and run out of towns by mayors, city councils and lynch mobs throughout the southern Colorado mining district. On Oct. 11, a newspaper reported IWW flyers circulating in northern beet fields, with messages in Spanish encouraging Mexican workers to organize and take back their land. On Oct. 13, a UMWA official predicted publicly that the strike would be called off.

On Oct. 17, IU 210-220 held four meetings, one in Lafayette with between 1,500 and 4,000 attendees. The southern area miners met in Aguilar, while a mob 75-strong ransacked and burned the IWW union hall in Walsenburg. 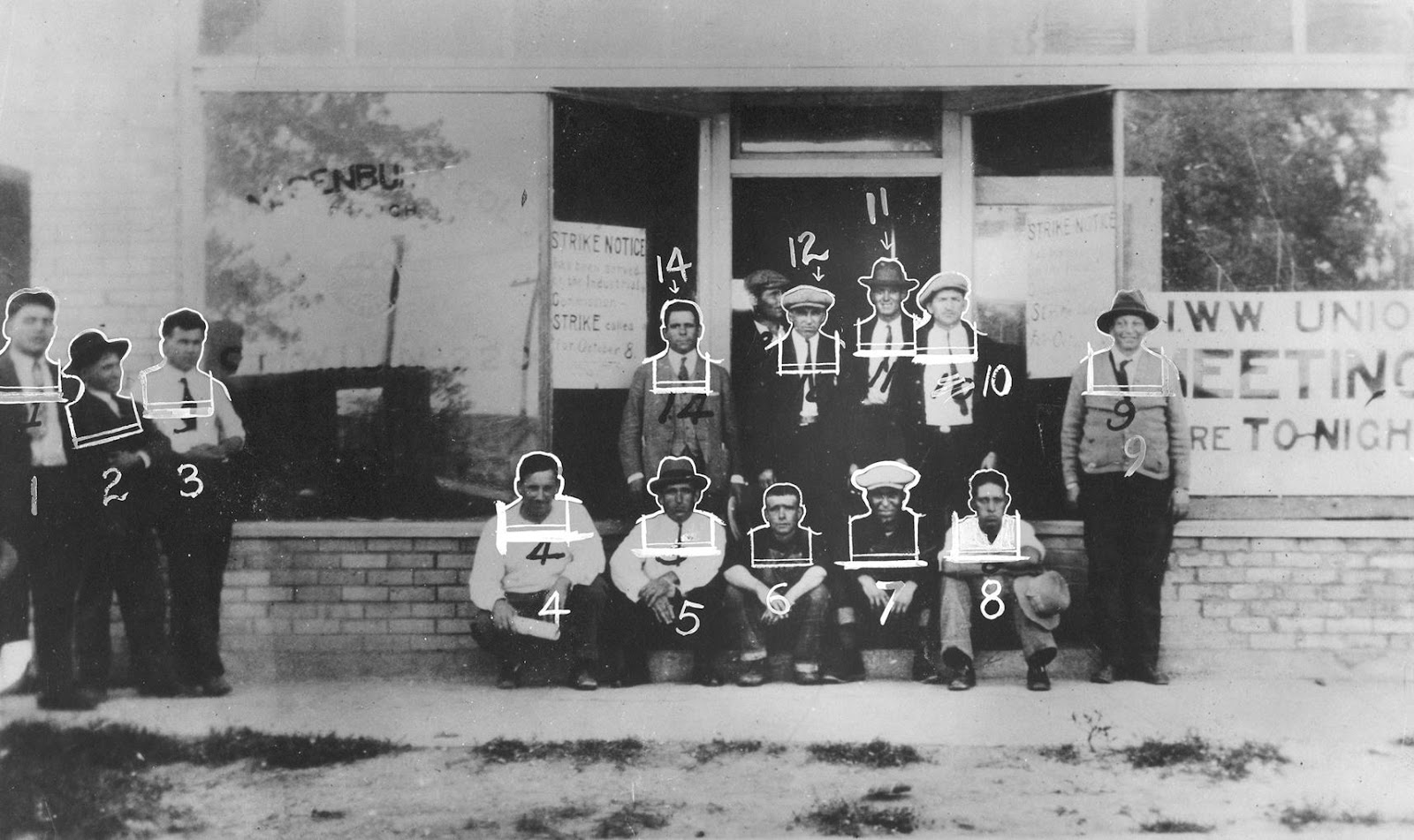 The strike began with unprecedented participation on Oct. 18, 1927, as half the miners in the state struck and pickets spread wherever mines stayed open. Over the next two days, statements against use of violence were issued by the General Strike Committee and the IWW.

Within a month the same workers would experience the state employing both violence and ad hoc legal maneuvers in opposition to their peaceful and straightforward demands for justice.

Dubofsky, Melvyn. We Shall Be All: A History of the Industrial Workers of the World. Chicago: Quadrangle Books, 1969.