This is Part III of an Industrial Worker series on Colorado IWW history.

The Colorado Coal Strike of 1927

When strikes began to break out in Colorado coal mines in the spring of 1927, it was far from spontaneous. Industry wages had been stagnant for years. Conditions for workers had declined steadily. The business unions had betrayed their rank and file members. The Industrial Workers of the World had regained a major foothold in the region.

The IWW had devoted resources to organizing the mining industries of the American mountain west toward the end of 1924. The number 200 is the union’s designation for the mining and energy industry, with 210 for miners and 220 for energy workers. Industrial Union 210-220 formed during the latter half of 1924 and in 1926, experienced organizers Kristin Svanum and A.S. Embree began to help workers coordinate their struggle and to support the IU as it continued to build grass-roots power.

Mass meetings and actions throughout the spring of 1927 led to confrontations with Colorado’s State Industrial Commission and a tense game of cat and mouse throughout that summer between authorities and strike leaders. IWW union members were in the meanwhile frequently jailed for organizing activities and subject to violence by hired goons.

By October 21, 1927 the Colorado Coal Strike strike was on the front page of both major Denver daily newspapers, where it would stay until the conflict concluded. They soon picked up on a 19-year-old miner’s daughter and native of the mining town of Walsenburg. The young woman was hospitalized after being trampled by a sheriff’s horse at a picket just south of Ludlow early in the strike. “Flaming Milka” Sablich, the girl in red, began to emerge as a protest icon. 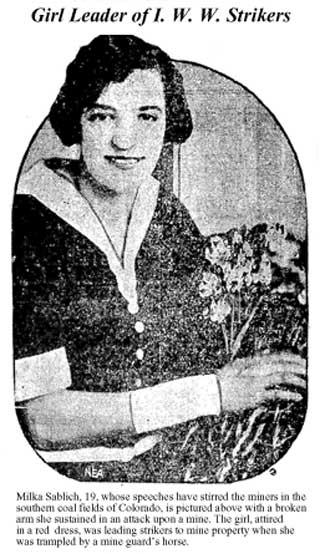 Picketing had been declared illegal in Colorado by state law in 1920. Organizers took lessons from IWW free speech fights in the 1910s and exercised rights to use public roadways and assemble on public properties.

IWW leader Kristin Svanum was arrested picketing in Trinidad on Oct. 23. In the north, low response to the strike call prompted organizers to assemble a convoy of 134 vehicles with over 500 strikers to spread the message.

The group set into motion on Oct. 26, just as the governor of Colorado issued a public statement to the press denouncing the IWW, and spent several days campaigning through the north fields.

The governor met the chairman of the General Strike Committee the next day while fuel companies and the Industrial Commission began offering the first pay increases. Raises were deemed inadequate by the strike committee. Leaders from the Colorado National Guard met with Industrial Commissioners and company bosses on Oct. 30 and afterward warned strike leaders to cease all activities and gatherings.

But the mass meetings were constant, with music and local and national speakers regularly addressing crowds. Svanum was out of jail, and participated in a vote to resume picketing in a mass meeting in Walsenburg. As the parades and gatherings grew in size and frequency, Colorado Fuel & Iron was scrambling, publicly reporting increased production while quietly laying off 2,500 workers, half its Pueblo steel production staff, due to lack of coal for operations on Nov. 3.

The next day, the governor reassembled the same state police force that he had once abolished in fulfillment of campaign promises. He chose Louis Scherf for his chief. Scherf was second in command for strike-breaking actions in 1922 under the same commander who led anti-worker forces during the Ludlow Massacre in 1914. At Ludlow, 25 people were killed. Eleven were children – burned alive.

The Columbine Mine Massacre

The new state police made their first move on November 5, 1927, at Berwind Canyon, where Sablich had been trampled not long before. Chief Scherf led 17 men into a confrontation with around 500 miners, arresting seven and fighting the crowd with clubs and fists. 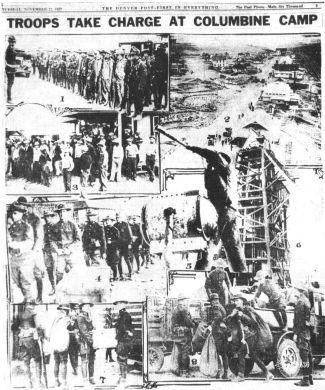 The governor authorized giving Scherf five times more men and military-grade equipment on that same day. Strike leadership, including Kristin Svanum and A.S. Embree, were arrested in midnight raids on Nov. 6 in Walsenburg and transported in secret to Pueblo, where they were put under heavy guard.

Strikers in the north responded by blockading roads and shutting down the Columbine mine. On Nov. 8, a group of 800 clashed with police there. The strike continued to gain strength despite the identifiable leadership being jailed. The deep organizing done by Embree and Svanum over a year-and-a-half and the radical democratic procedures used in the strike committees had equipped the miners to carry on no matter who was arrested.

Scherf’s forces numbered close to 60 when they raided the Nov. 9 IWW meeting in Walsenburg, arresting all speakers and again fighting with the crowd. The day after that, a combat aircraft and three other planes scattered a gathering of 3,000 people at the Ludlow Monument.

Mass meetings continued to spread unabated. A rally in Denver on Nov. 13 in support of the strike drew over 2,000 people. The next day to the north at the Columbine mine, sheriffs attempted to arrest protest leaders only to have them freed by the crowd. Mine officials threatened to shoot trespassers, who claimed the right to cross the company’s property in order to access a post office and a school.

The Columbine mine resumed operations on Nov. 16 with extra police forces transferred in by the governor, machine guns strategically mounted, and electrified, barbwire fencing. Striking miners persisted in parading and assembling nonetheless.

On Sunday, Nov. 20 a rally was held in Boulder that drew over a thousand people. The group was rumored to be planning a march on the Columbine mine property and the police brought in emergency reinforcements in the middle of the night. 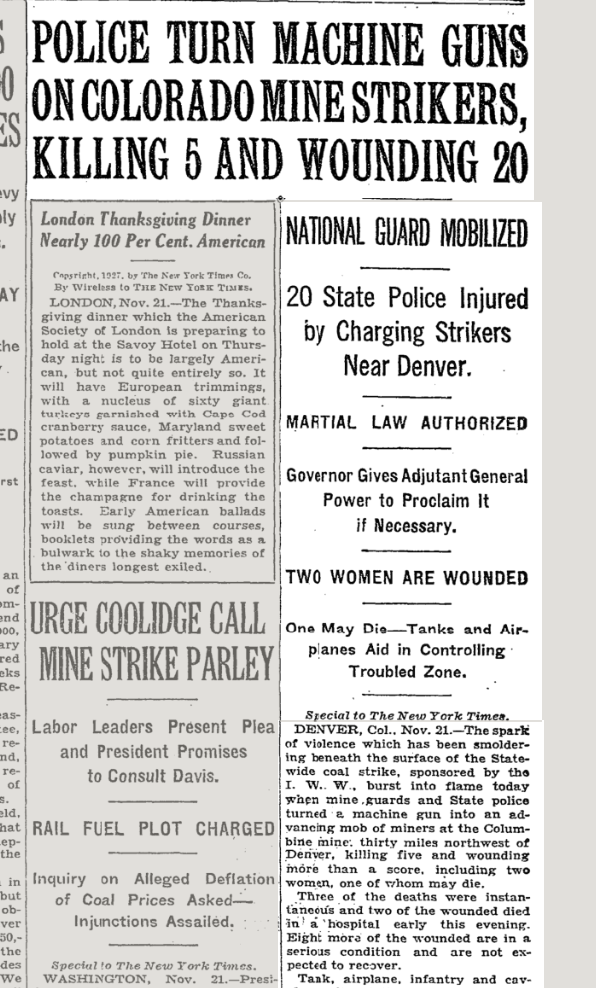 500 miners were confronted at the Columbine gate early the next morning by Scherf himself, leading a force of 20 armored police. Asked who their leaders were, they replied, “We all are.”

The crowd burst through the gate after Adam Bell, an IWW national leader, climbed the fence and was pulled over and beaten unconscious by police. Not long after the miners got through the gate police opened fire into the crowd at close range, killing six and wounding 20.

The end of the Colorado Coal Strike of 1927

The General Strike Committee for IWW’s Industrial Union 210-220 responded to the mass casualties inflicted by state police forces at the Columbine Massacre on November 21, 1927 by ordering union workers to stay home. The National Guard was on high alert and the strike committee decided to deescalate.

Public pressure brought about the Colorado Industrial Commission’s Dec. 12 announcement of formal hearings, which were held from Dec. 19 to Feb. 15 in Cañon City, Walsenburg, Trinidad, and Colorado Springs.

Thousands of miners were still out on strike, but were subjected to mass arrests any time they gathered in numbers. When the hearings came to Walsenburg on Feb. 12, over 500 Wobblies gathered for a parade starting from their IU 210-220 hall a few blocks from the courthouse.

The mayor of Walsenburg, who had led a mob to destroy the IWW hall three months earlier, ordered the state police chief, Scherf, to intercept. Police charged the marchers, then gave chase and opened fire on the crowd and the union hall. They killed a Wobbly in the hall, Clemente Chavez, and a 16-year-old bystander, Celestino Martinez. 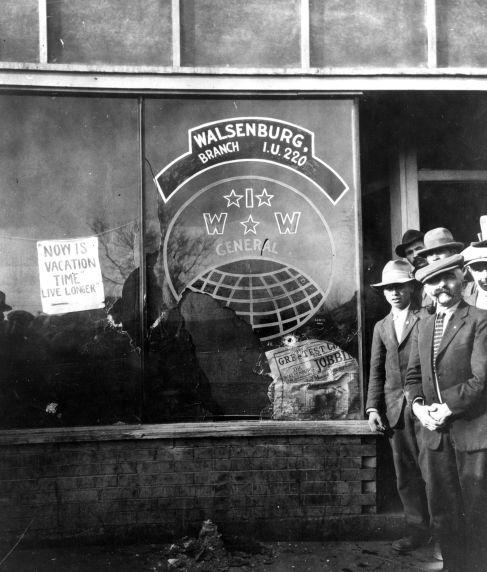 This time the hearings by the coroner’s office were passed off to the district attorney and a jury concluded the police were in the wrong and had shown a total disregard for human life. Nevertheless, no police were charged or punished.

When the Industrial Commission hearings finished on Feb. 18, 1928, IWW organizer A.S. Embree called for a vote to end the strike. Colorado miners returned to work having won the only wage increases in the U.S. coal mining industry between 1928 and 1930.

IWW in Colorado: Then to now

The tactics used by miners during the Colorado Coal Strike of 1927 were some of the most diverse and effective ever seen in the modern labor movement. Radically democratic procedures and genuine commitments to peace (when possible) set IWW IU 210-220 apart from more or less all its labor peers up to that time.

By 1932, when one of the first comprehensive histories of the IWW was written, the organization’s membership in Colorado had decreased to 500 or less. A.S. Embree left the IWW to focus on organizing and labor reporting with Denver-based Mine Mill in 1937. By the mid-1950s and the height of the U.S.’s second Red Scare, the national organization was down to a few hundred members or less in perhaps its ultimate nadir.

The Wobbly spirit did not (as it will never) die forever. Lifelong IWW member and writer Arthur J. Miller wrote of his own stint in the mountain west mining industry in the 1970s shortly after a tragedy. Miller recounted drifting into northern Idaho not long after 91 men perished in the nearby Sunshine Mine, and provided a snapshot of the working conditions.

Miller’s experience and perspectives are consistent with the attitude which came to reestablish the IWW in Colorado with a local chapter in Denver that dates back to the late 90s or early 2000s. An IWW working group is also building capacity in southern Colorado, centering operations in Colorado Springs.

If you are interested in organizing at work and keeping alive the spirit of A.S. Embree, Kristin Svanum, and other working-class heroes, contact the IWW today. In the state of Colorado, fellow workers can be contacted at denveriww.org.

Miller, Arthur J. “The Legacy of the Bunker Hill Mine.” Available at: <https://archive.iww.org/culture/articles/wpl/bunker1/>